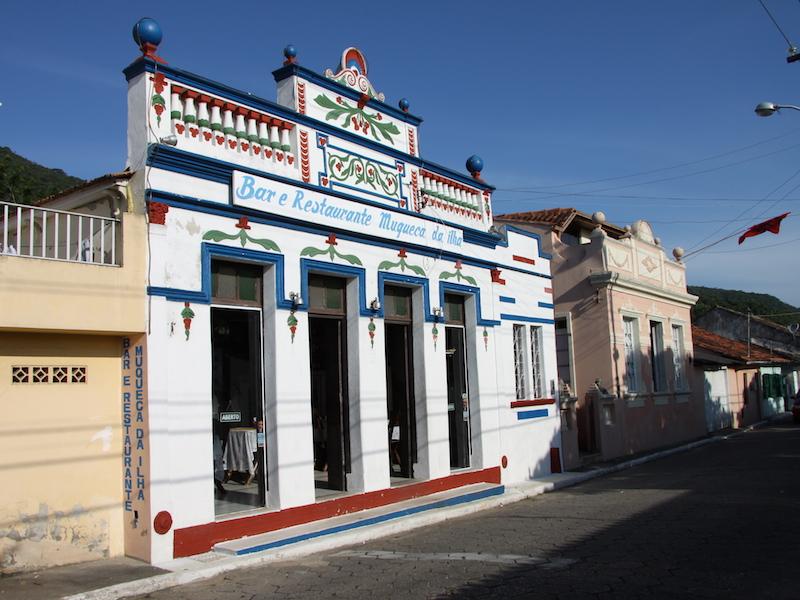 In the 16 th century, the Tupí Guaraní Indians inhabited Ribeirao da Ilha. Historians can track back the arrival of the first Portuguese and Spanish navigators to this region until 1506. To save the conquered area, Portugal sent inhabitants of the islands of the Azores to Santa Catarina, because there was a surplus of inhabitants. Between 1748 and 1756 about 6.000 Azoreans settled down at the entire coast of Santa Catarina. The district of Ribeirao da Ilha is therefore one of the oldest Azorean settlements. The Azoreans lived on fishing and established a peasant system. The immigrants from the Azores left a great cultural gift to their children: an own dialect, a distinctive allegorical folklore, culinary habits like several fish and sea food dishes and architecture.
Not only in Florianopolis, but along the whole coast of Santa Catarina signs of the Azorean culture can be found. The Azorean influence becomes especially evident when observing the architecture. The well-preserved, colorful houses and cobblestone paved alleys in Ribeirao da Ilha are characteristic for this wonderful fishing community.
Nice accommodations and pousadas near the beach are also located in Ribeirao da Ilha.

The many small beaches of Ribeirao da Ilha offer gritty sand and a very calm sea and are perfectly for excursions, leisure activities and to enjoy delicious food. Ribeirao da Ilha is famous for its great oyster production. Over 50 of the brazilian oysters are cultivated here. The oyster farms are situated offshore in the calm, turquoise colored water. In Ribeirao itself you can find a variety of excellent restaurants which are located at the sea. Of course they are specialized on sea food and oysters in any combination. Anyone, who wants to taste fresh oysters, is at the right place! Little landing stages lead you from the restaurant to the sea. Here you can enjoy a wonderful view over the beaches of the mainland of Santa Catarina, green hills, offshore islands and the oyster banks. In Ribeirao da Ilha miraculous sunsets can be enjoyed- the most beautiful ones of whole Florianopolis!

Ribeirao da Ilha is a perfect excursion destination and provides several tourist attractions, such as the church "Nossa Senhora da Lapa do Ribeirao", which was built in 1806. The church is located at a beautiful, old colonial plaza within the city center of Ribeirao da Ilha. In the ethnological museum of Ribeirao da Ilha, you can discover more about the historical heritage. Not only items of the ancients inhabitants, but also a corn mill is exhibited.
Ribeirao da Ilha and Santo Antonio de Lisboa in Florianopolis are the two best sites at the whole coast region of Santa Catarina to get to know more about the cultural influences of ancient colonies. Travel to Ribeirao da Ilha and take a cultural historical excursion to the past of this sympathetic fishing community!

Discover more about the traditions and habits of the inhabitants and enjoy the cultural heritage of Ribeirao da Ilha on a day trip! You can end the day with a good glass of wine, fresh oysters and a miraculous view over the surroundings of Ribeirao da Ilha.