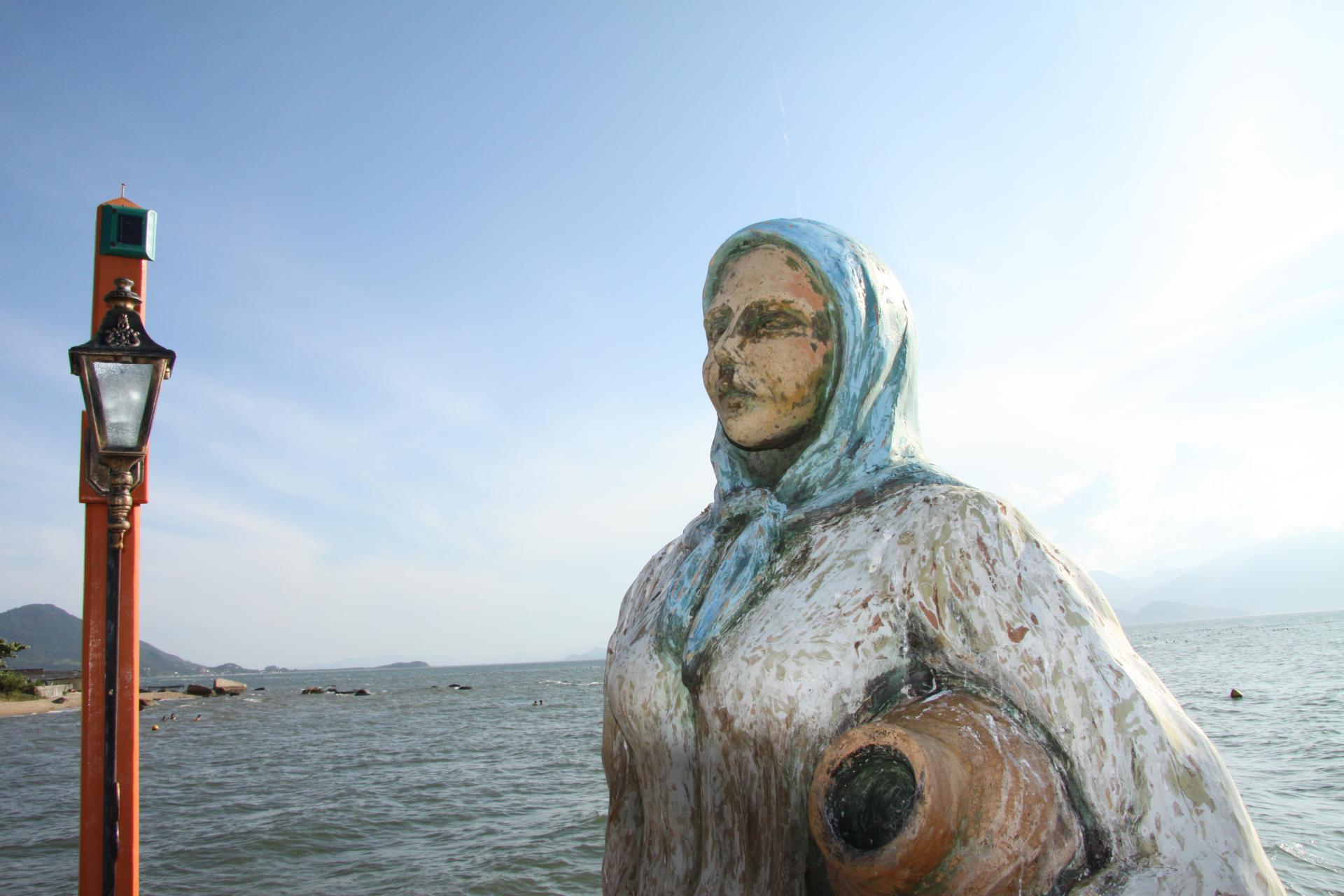 The "picture postcard", which identifies Florianopolis, is the 819 meters long bridge Hercilio Luz. Being built in 1926, it was the first connection between the island and the mainland.
Another milestone is the historical museum Palacio Cruz e Sousa, which is located in the inner city vis-à-vis of the famous plaza Praca XV de Novembro. The former gubernatorial palace was built in the 18th century and served the president of the province as residence and working place.
At about the same time also the city houses were built - authentic copies of the luso-brazilian architecture, which can be found in the Fernando Machado street.
The green plaza Praca XV de Novembro is the place, where Florianopolis has its architectural origin. In the 19th century, the place was still forested and nowadays you can find a giant hundreds-of-years-old fig tree. The people say, who circles the tree three times, will return to Florianopolis again and again. Here you have the opportunity to rest under one of the many wonderful trees and flee from the turmoil in the streets of the city center.
At the public market, the Mercado Publico, which is dated to 1898, you can buy sea food, fresh fish and handicrafts or enjoy a meal in one of the numerous bars and restaurants with the locals. The location is perfect for tasting extraordinary or exotic food in a relaxed atmosphere or just to watch the colorful turmoil at the market. The market is situated in the inner city, on the Avenue Paulo Fontes and is open from Monday to Friday from 7 am to 7 pm and on Saturdays from 7 am to 1:30 pm.

The fortresses form the old defense system of the island against pirates - mainly Belgian, Dutch and Spanish. The fortresses are dated back to the 18th century and attract about 200,000 visitors every year.
The greatest fortress is the Santa Cruz Anhatomirim (1739/1744). An interesting fact about the fortress is that it never fired one cannonball. It provides a wonderful view over Ratones, Arvoredo and the Santa Catarina islands as well as over other fortresses. There is a restaurant, a snack bar, a marine-aquarium and an exhibition of water animals.
Another fortress, which can be visited by boat, is the Santo Antonio de Ratones fortress (1730/1744). This building shows with its drawbridge, its fountain and its aqueduct middle age facets. Near the Atlantic Forest Park situated, the main attractions are the Ratones Ecological Trail, which teaches their visitors the flora and fauna and the photo exhibition "Santo Antonio de Ratones Fortness Memory".
In Forte Beach you can also find the Sao Paulo de Ponta Grossa fortress (1740), a wonderful complex with 3 levels, a prison, a guard, a head quarter, a commander house, a barn and a chapel. Furthermore, you can buy pillow lace there. The castle is accessible via the beach Jurere International. The opening times are from 9-12 am and 1-6 pm. In January from 9 am to 7 pm.

The Eli Heil's Egg World, that has sculptures and paintings of this artist, is located in SC 401 highway, 7079, near Pojar, Cacupé. Victor Meirelles Museum, an 18th century house where the painter was born, is located on the corner of Victor Meirelles and Saldanha Marinho street, downtown. Victor Meirelles is considered the greatest Brazilian historical painter, whose work "The First Mass in Brazil" is one of the most valuable paintings of the country. The Customs' Museum was built in 1875/1876, in neoclassical style. Nowadays it is the Santa Catarina Plastic Artists Association office - ACAP and a souvenir shop. It is also a place for local artist's exhibitions. In the same building there is a pub that is open until 11 pm.
Santa Catarina's historical museum Palacio Cruz e Sousa is located in the city center vis-á-vis the Praca XV.
In the fishing community Ribeirao da Ilha, which was discovered by Azorean settlers, there is the eco museum do Ribeirao da Ilha. It was founded by professor Nereu do Vale Pereira, famous researcher of the Azorean culture.
The museum do Homem do Sambaqui "Padre Joao Alfredo Rohr" is impressing because of its over 5,000 unique pieces of former times and provides access to the most important archaeological treasures of Brazil. The exhibitions show between 1055 and 1552-year-old skeletons, which are in an excellent condition, 225-billion-year-old fossils, animals of all species, coins, tools and other utensils of former indigenous people. The museum is located in the inner city in the Colegio Catarinense in the Rua Esteves Junior 711.

In addition to the Casa Azorean's pottery, the island has carpets, blankets and bags made of fishing net, sheep wool and natural fibers. These crafts can be found at Nara Guichon's studio - Rozália Paulina Ferreira Road, 4343, Costa de Dentro, access by Pantano do Sul. There are also resin miniatures and plaster shaped replicas of Santa Catarina's historical buildings on 15 de Novembro Street, 147, Santo Antônio de Lisboa and at Customs' Museum.
Behind the Mercado Publico in the inner city there is the Casa da Alfandega, a former customhouse from 1876, which has developed into a famous hall for arts. Over 200 local artists exhibit their handicrafts here. Some of them also create their art on site, so that you can watch glassblowers and pillow lace makers doing their work. Here you have the opportunity to buy some souvenirs.
On Tuesdays and Saturdays there is the handicraft market Feira de Artesanato taking place in the city center at the plaza Praca de XV Novembro, vis-á-vis the cathedral. Over 100 artists exhibit here their handicrafts.
Each Sunday there is a weekend market in Lagoa da Conceicao with several Handicrafts and food stands. Here you can find handmade jewellery, weaving pieces, pottery goods and many more handicrafts from local artists.
Florianopolis is also famous for its traditional creation of pillow lace. You can find it in the Avenida das Rendeiras in Lagoa da Conceicao. Here, you can watch the local pillow lace artists doing their work.

Florianópolis has 4 theaters: the historic Álvaro de Carvalho theater, which started being built in 1857 and was opened in 1875, with 470 seats. The modern Ademir Rosa theater, located in the Integrated Center of Culture, with 956 seats, the Igrejinha (UFSC) theater and the União Beneficente Recreativa Operária theater (UBRO).

Lagoa's region concentrates the best parties of the island, with several options such as Latitude 27, John Bull Pub and Confraria das Artes. El Divino Lounge is the most popular downtown pub. The traffic is usually difficult in this area and some streets were turned into pedestrian zones. But there are several great pubs and restaurants. In summer, there are some options as Ilha do Cascaes at Costao do Santinho resort, the favored beach disco P12 and KM-7 in Jurere International.

There are a lot of gastronomic places on the island, where you can enjoy a wide variety of dishes, from Oriental, Spanish, Portuguese and Brazilian cuisine. Florianopolis is famous for seafood dishes. Oysters are cultivated in the south part of the island near the mainland, and are very freshly produced. Good shrimp are found in Lagoa da Conceiçao. Mullet is the typical fish in most Florianopolis' dishes. One of the most typical dishes of the region is the mullet, caught between May and June. It is a dish in which the fish is salted, dried and served grilled.

The metropolitan cathedral was built between 1753 and 1773 and hosts an impressing collection of religious art.
The Sao Francisco church is situated in the historical part of the city. The construction began in 1803, it was opened in 1915.
Apart of the changes and the new painting it got since its foundation in 1780, the church Nossa Senhoa da Conceicao is an excellent example for the architecture, which was brought to the island by the Portuguese. The church can be found near the Morro da Lagoa.
The church Nossa Senhora da Lagoa do Ribeirao with its many original architectonical specialties was built in 1763 and is situated in Sao Joao. The church was visited by Dom Pedro II.
The chapel Sao Sebastiao do Campeche was named historical, artistic and architectonical landmark of the city. Due to the spoken tradition, it was built in 1826.

The Aqua Show Park is a theme park, which is surrounded by gardens, flowers and birds. It is located in the SC-403 Road 3868 in Ingleses.