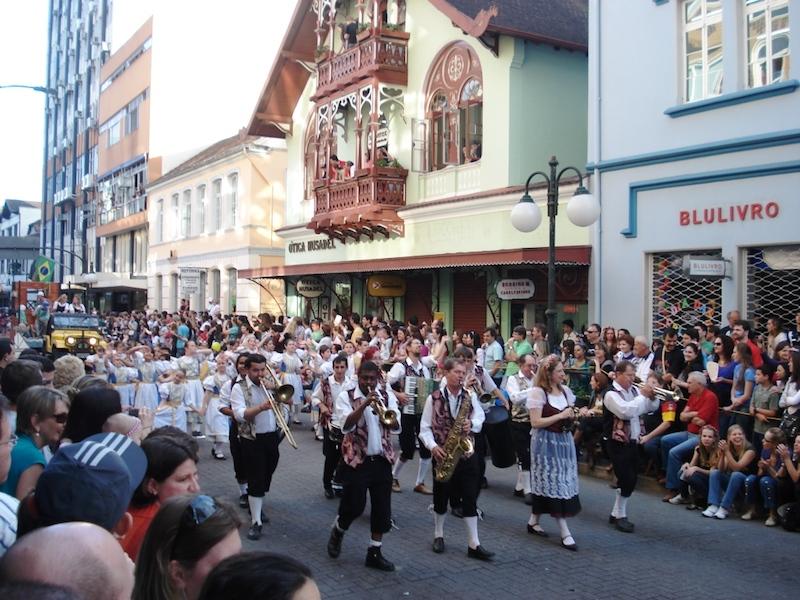 Blumenau lies within the valley of the river "Rio Itajai" surrounded by hilly landscape. The city of Blumenau was founded in 1850 by the German immigrant Dr. Hermann Otto Blumenau and is today seen as the finance center of Santa Catarina. Besides tourism also the textile and porcelain industry are important industry branches for the city. Blumenau belongs to the cities with the best living quality in Brazil.

The German influence can be observed within the whole city. Nice frame houses enchant the visitors of Blumenau and are characteristic for the cityscape. German traditions are present in Blumenau and are also preserved by the inhabitants of the city. Many of them also speak German. In Blumenau you can find typical German sweets and bakery products, cozy cafés with blackforest cherry cake, beer gardens as well as potato dishes with sausages, poultry and pork meat at the menus of Blumenau’s restaurants. Over 35 hunting and gun clubs are spread all over the city and you can find breweries and marching bands.

The main attraction of Blumenau is its Oktoberfest, the most famous festival after the Carnival in Brazil. The Oktoberfest in Blumenau in South Brazil is the second greatest after the Oktoberfest in Munich, Germany. Within the commercial center of the park "Parque Vila Germanica", which was built in 1985 and is the Germanic village in Blumenau, typical German products and souvenirs are offered like chocolate, beer mugs, beer brewed due to the German purity law, wine, etc.

Blumenau is the ideal place for culture tourism. Due to many attractions and an impressing landscape, Blumenau is an excellent destination for excursions during your holiday in Santa Catarina. Vacationers can explore the varied program on a tour in Blumenau and a daytrip to Blumenau. Numerous churches, museums and theaters form a great offer of cultural sites and guarantee diversification on your holiday trip to Blumenau. From here on you can also reach different excursion destinations: 90 kilometers from Blumenau located, there is the city of Joinville , 49 kilometers away you can find the city of Itajai with the biggest fishing port of the country and another destination is the city of Pomerode, which is also influenced by the German culture.

Blumenau offers a variety of accommodations. Family owned pousadas with a friendly atmosphere and first class hotels guarantee an unforgettable stay in Santa Catarina. Explore the German home within the middle of Brazil!
Get informed here about our daytrip to Blumenau and Pomerode!
We will be happy to provide you with packages for the next Oktoberfest in Blumenau. Please contact us here.


The Oktoberfest in Blumenau

It is the second greatest festival in Brazil after the Carnival in Rio de Janeiro and with 700.000 visitors the second greatest Oktoberfest in the world!
Originally, the Oktoberfest came up due to an extraordinary initiative: Within the years 1983 and 1984 the city of Blumenau was flooded two times. To fill up the city treasury and to cheer up the inhabitants of the city, the Oktoberfest was established after the prototype of the Bavarian festival. The success was striking!
Also here liters of beer were drunk like in Germany. Only for this purpose, marching bands came from Germany and several processions provided a jolly mood. White sausages, sauerkraut and pork joints can also be found by the visitors. The Brazilians love this festival and I was even surpisingly asked several times: "You really also have a Oktoberfest in Germany? But it can´t be that big as ours!”" "This made me smile more than once" (citation of Nicole Sagemüller Esteves).
The Oktoberfest takes place yearly, mostly in the first 17/ 18 days in october.

Those, who want to book a room within this time, should do it early in advance, because the most hotels are fully booked weeks and months in advance of the Oktoberfest.

You can perfectly combine the visit at the Oktoberfest in Blumenau with a holiday in Florianopolis and a visit of the waterfalls in Foz do Iguacu. Get more information here.